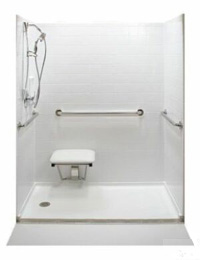 Unlike traditional showers, an roll-in shower has low-profile shower pan and threshold, usually with several grab bars and a seat. A shower wheelchair can be rolled over the threshold into the shower. A person can also walk into the shower and sit down on the seat for bath.

The cheapest roll-in shower is under $1,000 dollars. With installation, the number usually goes up to $7,000 or more. If some interior walls have to be taken down, the number can easily go over $10,000. So what happened?

There are several reasons why retrofitting an accessible shower is very, very expensive:

3. Re-routing plumbing is another big part;

4. In some cases, workers have to cut the floor and construct a new SUNKEN sub-floor to accommodate the low-profile accessible shower pan;

5. If the new shower stall fits within the existing space, you should consider yourself lucky. Because in many cases, the newly shower pan is TOO BIG to fit in and walls must be taken down.

So the remodel is done, and the new shower is in, is your bathroom accessible now?

Mr. John Sargent of RampNow, Inc in Chicago, IL has been selling and installing wheelchair stair lifts for years. According to Mr. Sargent, the most common reason why people spend several thousand dollars to have stair lifts in their home is to get to the shower upstairs.

So if you decide to remodel your shower, take careful measurements of the new shower stall, plan ahead, and most importantly, know how to get the wheelchair to the shower. A simple mistake can cost you several thousand dollars, leading to disputes and even lawsuits with your contractor.

Accessible showers could affect your house resale value. This is because water is easy to spill out of the low threshold and make the floor wet. Any handicap showers are turn-off's for young families with kids. 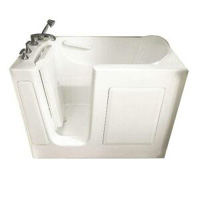 A tub with a side door is called a "walk-in" bathtub. Inside the tub is a seat for someone to sit down. The door has rubber gasket to remain watertight.

You cannot roll a wheelchair into the tub. If a person is confined to a wheelchair, walk-in tubs are not helpful.

The door seal is specially made for each tub. As the seal wears over time and becomes leaky, you must buy a replacement seal from the same manufacturer and replace it. 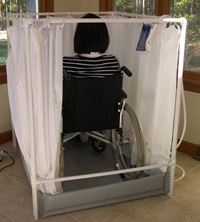 2. You can use the shower ANYWHERE in your home. For example, you don't have to struggle to get the wheelchair upstairs if you use your portable shower in the kitchen.

3. Our recliner model allows a person to lie down in the shower because the shower tray is 7-foot long. It is not possible for either accessible shower or talk-in tubs.

4. You don't have to worry about home resale value because you can fold the shower up and store it away.

Allow person to sit down?

Install at any location ?